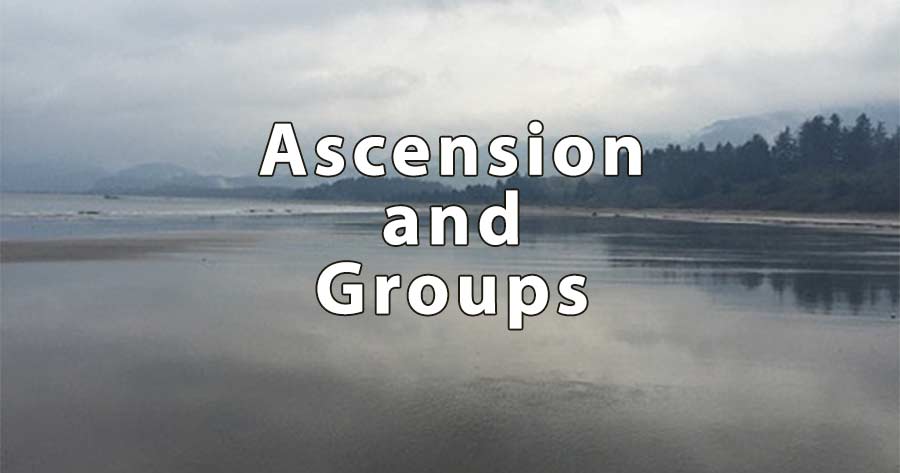 It was Jesus that was reported to have said something in the nature of “For where two or three are come together in my name, there am I among them.”

This sentence promotes a 3D group. A savior is needed, or a deity or person to focus one’s love to, rather than existing as each individual being Source.

It is no secret, although to me it is a real mystery, that when two or more people of a high vibrational nature meet, their ability to affect their own work, lives, environment or visions, is much more effective than when only one person is there. It is almost as though by joining with others, the power generated is greater than the sum of the total individual powers.

For me this is annoying to say the least. This is because I do not work well with others unless I can come and go as I need, and often in groups others will project or require “savior”, “need”, ‘co-dependence”, “commitment” or their “love” to one person or each other rather than the temporary project we are working on.

However, when I am with others, one or more, to do a very specific session, or for a specific reason or project in a state of non-dependency, non-commitment except to stay through one’s own choice because the work brings satisfaction, even if the reason is to enjoy a hike,  it is a fantastic experience.  I LOVE working in these groups.  But I see them more as connections, networks, rather than groups. We come together temporarily to achieve a common goal which is inspiring, passionate and perhaps meaningful.

Even in my personal work, that of channeling information and writing it down afterward, I am much more effective when there is someone there asking me questions or tapping into their own streams of consciousness and databases or processes, that I can then have access to.  So, I call for temporary groups to come join me in the co-creation. People come and people go as their own interest comes and goes.  It is organic, it moves, it shifts and changes, it is rich and powerful, varied and colorful.

So groups are indeed very useful. Are they necessary? Not really. We can do the work on our own, as many, MANY, solitary workers will attest. But it is different. It could be said to be more effort involved at some levels and less in others in each configuration (alone or in an group).

To work in a group in present time (3D) there appears for the group to needs to be a group reality agreement. They have to agree to what is real, and new members have to agree to that reality for it to work. It is also the nature of human 3D groups to have a leader. Once these are sorted, working in a group can be very satisfactory for those involved.

For the group to work, if the members of the group connect to each other at a heart level it moved from 3D to a higher configuration. This means, from a level of unconditional love and open hearts. If it aligns to one specific person at a love level, need level, a specific external problem level, or issue level, or mission level, but not a HEART level, it causes a 3D group.

I work with people all the time, both on the phone and in person. The work is very specific, but without that unconditional love connection, it would be useless to say the least.  IF that love connection becomes “conditional” in any form, such as exclusive, dependent, or needy, the work falters and falls.  The agenda turns to “follow a guru,” rather than, “lets co-create this in an organic manner”.

Occasionally I will work with a person who really has “no business doing work with me” if looked at from a limited viewpoint. Not because they are “not worthy“, but because they have no interest in staying in an ascended sovereign state. They will arrive to me through curiosity, or because his or her best friend had a session and he or she wants to get one too as the latest fad, or because they have projected their authority onto me.
These are the hardest ones to work with because they are not in the space from a unconditional heart centered perspective. It will take lots of sessions to get them to see Oneness even, let alone experience it. Then they go away and ask for advice on their “path” to Oneness. And they often return over and over asking for more, still projecting their authority and “needing Inelia”.  If I refuse, they feel abandoned and “left behind”.
When this happens, it is difficult not to roll my eyes and sigh. It could be frustrating too, and there was a time when I would have done all these things. Yet the work stands. It is not a coincidence that they crossed my path. It is true that with the two of us working together at that particular time/space, they did indeed experienced a sense of the state of Oneness, albeit “conditional and temporary”. Whatever happened to them afterward is their choice, but at least the seed remains. One day, perhaps in this lifetime, or maybe the next, that seed will sprout. When that day arrives, it will become clear that it was not I who planted that seed, but themselves… out of all the “wrong” reasons.

So even in a group, whether small or large, that has only you as the person with the open heart and flow of unconditional love, the work you are there to do can get done, but it is likely that sooner or later you will “become the leader” and others will start pulling at your energy, attention, and “leadership”, or projecting their authority onto you.

If you find yourself in a group where a lot of the members are negative and have low vibrational perspectives, look for the nearest exit sign and run out of there as fast as you can. This is because the opposite is also true. A group of negative individuals is more powerful in their negativity than the sum of their individual negativity.

It is our human nature to join with others. We are all interdependent in existence.  This natural aspect can, and has been, exploited through programming.  One way to see if that is the case, is when we feel, or are told “we cannot leave the group”, for whatever reason. Or if we do leave, we cannot come back. Or if we disagree with the “group reality” we will be thrown out and lose all our support, love and connection.

A higher vibrational group that comes and goes organically as passions for doing, or passions for projects arise, but gels in a sense of equality, not focusing their need or love on one particular person, God, being, or mission, but simply doing what brings the most joy at any one time, and each acting from a location of sovereignty, power and ability, that’s a group that has moved into another dimension.  It is hard to see how it can even survive as a “group” in present day society, and maybe that’s the key, maybe it is no longer a “group” configuration, maybe the answer is simply “two or more coming together to achieve a common goal” rather than “when two or more come together in my name“.