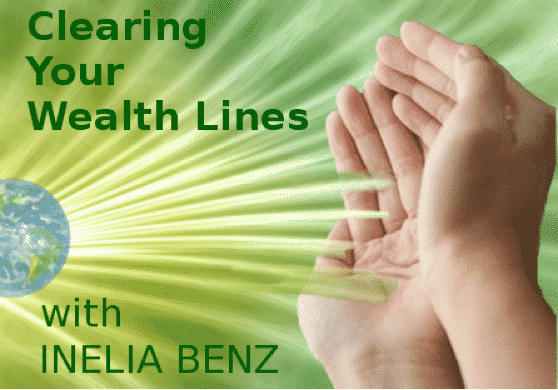 Excerpt from the Clearing Your Wealthlines Class:

“… I’ve managed to really create a supportive environment for myself so that I can do this full-time, I don’t have to have a part-time job anymore to support myself while I’m giving out the message and being a voice for this message. And one of the things that I had to work through and I’m still working through, in fact, is another teaching that came from my parents where my sister and I when we were small, we were able to tap into the collective and find out, for example in a race, what horse was going to win. Things like that.  And we were very good at it. I’ll tell you a little story about that – and this is part of that program, right, one of the programs that I’m still actually working on, there’s a little bit of it left so I have to really fine-tune it, I have to go in and see. Where is that energy and allow it to exist, it’s hiding, moving around, as they do, they hide, they move, they morph, they change, they become a physical thing, then they move back. Some of them are quite hard to find but we can do it, we can do it if we keep at it and then we infuse it. You know, if all else fails, just infuse it with light and love, yeah?

We lived in a really, really tough neighborhood but funnily enough I never saw anything bad happen there. Nothing bad ever happened to me there either. Apart from a dog that bit me once, haha. But that was because I was projecting hate to that dog, thinking ‘you’re horrible, go away’. you know? But anyway, what happened about the teaching of the money thing was that we had a friend who had been my teacher in Scotland. When we lived in Scotland before we moved to Nottingham, this woman, she was an English teacher and I was taken from school and I was put into her class in Stirling, from Falkirk to Stirling. And she would supposedly teach myself and other foreign kids English. But she actually used to disappear for a whole morning and let us play with lego and other stuff, it was really boring. I used to wander off, it was a beautiful castle in Stirling that was part of the university there, I think. It had a beautiful cemetery next to it. The energy was really interesting. But this woman had a really interesting character. And when we moved to Nottingham, she actually moved down as well. She followd us down there. I don’t know why but she did, and I used to spend a lot of time with her. She was really really great. She was a really fun woman. And she used to bet on horses with her boyfriend.

One day she had promised to -because I love horses- she promised to take me to this racing track. So I went with them and they were like really heavy-duty gamblers, they were really heavy-duty. So I went with her and she said to me ‘okay I’m going to give you like £1’ -a Pound, which is the money over there- for a horse, so pick a horse and then we’ll put the Pound on it for you. So I went around, I literally walked around all the, where the horses were standing and I asked them ‘are you going to win today?’ and one of them said ‘no, no, go and check over there’ and eventually I reached one of them and I said ‘are you going to win?’ and he said ‘yeah, I’m gonna win today!’ So I said ‘oh cool’ and I went back to her and I said ‘I want that one’, and she said ‘oh but the odds are such and such on that one and it’s probably, bla’ and she explained all sorts of things to me and I said ‘no no, no I want that one anyway’ and she said ‘are you sure? And you want the whole Pound on that one?’ And I said ‘yeah, just that one, that one’s gonna win’. So she put the Pound in, and sure enough the horse won and she said ‘how did you know that?’ And I said ‘well, the horse told me’ and she went ‘really?!’, I said ‘yeah’. So, of course, the next race she says ‘can you go and ask the horses which one’s gonna win’? So I did, and of course the horse won and the third horse, of course, they put all of their money onto this third horse.  And so yeah, it won, and they got a ton of money, it was a huge amount at the time -I have no idea how much it was- and she said that because they’d won so much money she gave me a tenner, she said ‘this is for you’, it was really funny, I was really happy, you know I’d never had so much money. And we went home, and they bought a new car and they moved to a nice place, and all sorts of things. And my mom, when she found out, she said ‘Inelia, that was VERY, VERY wrong, you’re not to do that again’ and I said ‘why?’ She said ‘because that’s cheating, gambling is all about people not knowing who’s going to win, and then everybody has the same chance, but what you did wasn’t right because you knew who was gonna win so that wasn’t gambling so you took away everybody else’s chance’. Which was, thinking back, really illogical because everybody could’ve betted on the same horse. It didn’t really affect what other people were betting on. And, but that program went in really deeply, you know? It’s like ‘oh my gosh, you have to be really fair’ and I can’t win any more lottery tickets and I cant win the horses, and I can’t win anything because that’s cheating, you know. So that program went in really deep, and even today, whenever I’m going to bet or something, I still have that energy come up going ‘wow’ you know? It’s like ‘you’re being a bad girl, type thing’. So yeah, I’m still working on that one myself, and I’ll let you know how I do -or maybe you’ll find out!

But yeah, so we work on those very specific personal programs and belief systems and emotional packets of energy that will prevent the energy field, the elemental of money from entering our own field. So just work at it, allow it to exist there and even if you can’t let it all the way in, just allow it to be like, I don’t know, 10 feet away or something ‘alright I’ll let you in 10 feet from me and there you are, I can look at you and explore you’. And do that. See how close to your field you can allow the elemental of money as it exists today on this planet, right now, with all the stuff that’s attached to it. How close can you allow that into your own field, can you allow that fully into your field? Because if you do, it’s going to be cleansed, it’s gonna be infused with Light and Love and it’s gonna be morphing into its natural energy. It’s natural composition. It’s going to free all of the chains and pollutants that has been added to it. And the more of us that do this, the healthier as a collective we’ll have with the elemental of money. The elemental of energy exchange.

So, just as it exists today, how close can you let it? And allow it to push your boundaries a little bit, to push your comfort level a little bit, just pull it in a little bit closer. And just walk around it, energetically or in your mind, walk around it, look at it, allow it to sit, sit with it, just sit and look at it. Just look. You might get information from it, you might get visions or flashes like movies playing in your mind. And allow those to happen. Just look at everything like you were looking at a movie. Look at any emotions you may have. And bit by but, move a little bit closer, allow it to move a little bit closer to you, you know.
Do that for the next few days as well. I’m giving you loads of homework and I want to hear back from you, saying what’s been happening with your homework on the forum.

That’s the first part of the: ‘how to look at our constructs and things’.

The other part, the second part of this same topic of the energy or the elemental, are money lines…”

The above is an excerpt from the Clearing Your Wealthlines Class Download.