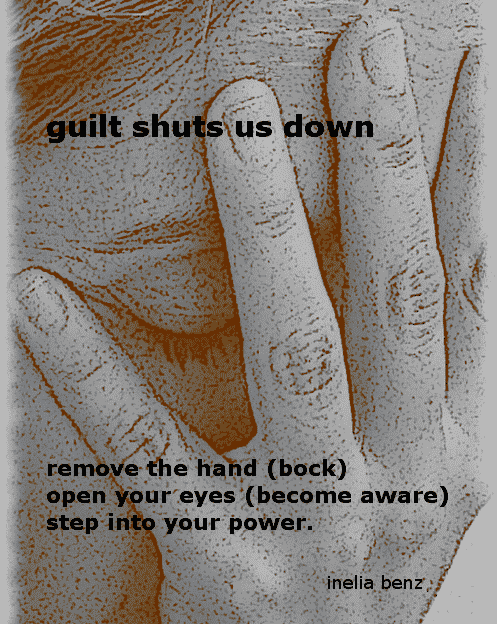 So, I wake up this morning and find myself feeling guilty… oops what did I do???

Guilt is one of those dissonant energies that are widely promoted by the popular media, religion and cultural and social programs. BIIIG TIME. Why? because it lowers our vibration and sucks us into the victim/aggressor cycle.

My first thought was, “what did I do that’s so bad to wake me up with buckets of guilt?” I spent several hours allowing the feeling of guilt to exist, express, grow… and nothing.  I had no idea why it was there, or where it came from.  I did see that it had overtones of victim/aggressor energy, and fear.

When I was a young kid, at some point I decided I wanted to experience life as a regular human being experiences it.  This was mainly because I had no grasp of why people behaved in the way they behaved, or held on to dissonant energies way past the time they were triggered.  The decision was immediately carried out, and I was able to experience many strong, human emotions, conflicts, decisions, I suffered (held on to pain past the moment of its usefulness), and so on.  But it was artificial, and even at the darkest pits of despair, I was observing, learning, knowing it was artificial.

One of the first acts I did as a kid, when I was able to “experience” being human, was to remove a personal guilt by removing the memory of what I had done/experienced from my mind. This cascaded into forgetfulness, the vail fell across my eyes. Before that, I had complete recall of every single moment in my life. I could quote from a random page of a book I had read several years earlier. After that, I couldn’t remember what I had for breakfast.

Some decades later, the usefulness of “living like a human being” died off, and I stepped into my natural self once more, but with several programs still in place from the years of “being human”. This means that often I don’t know what a particular dissonance is about, where it comes from, or what triggered it, but have a sense of what it might be by it’s “description”.

This morning the feeling of guilt was in my field, in my body, and I could not figure out where it came from, what “I had done” to activate it.  I thought about the last thing I was doing last night, and remembered I was working on an article on war. In that article I talked about a veteran I had met a couple of weeks back.  And I thought, that must be it, I don’t know how to contact him (he was a guy I talked with in a cafe), to ask permission to share his experience.   I thought, “I don’t have his permission, therefore sharing his experience is wrong”.

I deleted the article. Nothing. The feeling was still there.

There are two adults living with me in my house, so I basically told each one that I was feeling guilty and didn’t know why, did they have any input. One went into a huge dialogue about how guilty he felt about something or other. The other simply had no idea.

I thought, maybe I’m feeling someone else’s guilt? Is this something in the collective?

The resonance of the find went through my body immediately. There is someone feeling guilty in my field of awareness.  Then I received a strong, “I am so sorry.”  But… sorry about what?

The victim/aggressor overtones picked up. And as I was looking at those, I saw the person behind the mask.

Then I got it. It was nothing more than a mystical play of agreement.  This is when energies are overlaid in a person to cause them to think they have done something or something will be done to them, or something is about to happen to them. Often what follows is an actual act of doing something, or being the victim to something, that corresponds to the energy being overlaid. The reason is that the person “believes it”, and therefore it is a “yes, go ahead, this can happen in my life”. The unconscious agreement to the act being done on the person.

My entire life there have been attempts to suck me into the victim/aggressor cycle, where I would be either taken out or disabled enough to make me ineficient in delivering the message of empowerment. And many times I was sucked in big time, for many years.

I fell for it today, I was running in circles for hours. And if I hadn’t identified the ultimate “intent”, I would still be running around, perhaps in fear that someone was about to do something horrid to me. And it was that last attempt, the attempt to make me fearful, that gave the game away. You see, I am not important. If I fail, someone else, actually hundreds of people, will continue delivering the message of empowerment. And even at my most stupid/ignorant times of my life, I survived all these attempts, and lived to deliver the message another day. Now, today, although not the wisest person on the planet, I am not taken in so easily.

We are all connected. And if I had not processed this situation, anything I wrote, anything I did, expressed, would have had a layer of “wrong doing” in it. Anyone who is waking up, or is sensitive to energies, would have picked up on it and felt that I was guilty of something.  So, the implications of how I deal, or not deal, with what pops up in my life are broader than just me.  This energy would have quite effectively polluted the message of empowerment that I deliver every single day.

The reason I have decided to make this very personal journey public is because it clearly demonstrates how dissonance can make us spin into the wrong paths.

YET, whether that dissonance is from an external source, or whether we did indeed do something dissonant ourselves, we can step out of it in a moment. There is NO POINT keeping the feeling of guilt after something we did. Instead, see it as a red flag. It is your body, your higher self, your emotional body, your energy body, your mind, telling you there is a huge dissonance between your true self and your action.  Process it, and move into a more resonant Self. The more resonant we are in ourselves, the broader our awareness, the more we can step into our power without fear. The more we can be that person that others can map to. The person who is wide open, transparent, empowered, and living in complete resonance.

Come and explore this and other topics at our Walk With Me Now Empowerment Platform.