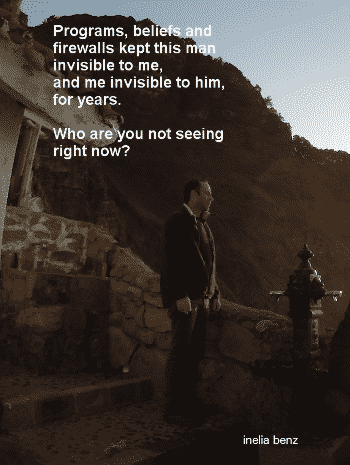 One of the things that individuals will most often say to me, is that what they respect about me is that I walk my talk. That my personal life is not only open and transparent, but it perfectly reflects what I teach. I use the tools I have developed and/or “uploaded” from our common Source and integrate them into my daily life.

When I have a personal breakthrough, it’s something which has come about through directly using the developed or uploaded tools. This is how I know they work, I use them myself!

On the 24th of December 2014, I published my newest novel, “Interview with a Psychic Assassin”.  During the writing of the novel, and parallel to it’s end, I found out that a close friend of mine was in fact my life partner.  My life has completely changed since then, for the better.

In 2010, I brought into our collective consciousness the Ascension101 Course. This is an amazing foundation for anyone who wants to empower themselves, wake up fully, or simply needs a refresher course to get them back on track after decades of spiritual training.  I have since “taken” the course several times. Every time there is more growth, understanding and my life becomes easier and easier. This caused huge changes in my life, and also has given me the strength and energy I needed to be a public figure. I am a recluse by nature you see, very private and prefer to observe than be observed and prefer to listen than to be listened to.  The Course gave me the connection I needed to all aspects of myself that required strengthening and healing.

But what about my personal life? What about love?

For years I was asked about soulmates, sex, love, and relationships in hundreds of emails and Facebook messages.

So, in 2013, I created the Sex, Love and Soulmates in the New Paradigm Course.  Even though I personally did not have much of an interest in finding a perfect mate, my Higher Self had other plans.  As I always do, I took the course myself. It was really quite amazing to see how all the information fitted into my personal life.  What belief systems I was carrying, what blocks and firewalls to a fully satisfying relationship I had, and how I was blind to the existence of men who were perfect mates for me. As well as how and why this happens.

Because of the nature of the Interview with a Psychic Assassin novel, before I started writing it, I took the Course units in Sex, Love and Soulmates again in 2014.

At the time, in my personal life, things were breaking apart.  I had been asked by Source, Gaia, the Human Collective, to stay, live and work in California for many years. But at the start of 2014, it asked me to leave. In fact it was very insistent that I leave! But by now I had been in California for nearly 10 years, had a life there.  Two of my children live there, my ex-husband and close friend lives there.  So, I procrastinated moving out. The result was that I got extremely sick for months. There were a couple of close calls, when I nearly didn’t make it.

In September 2014, I had the opportunity to spend some hours with an old friend.  A man who lived all the way up on the very tip of Washington State, so we didn’t get to hang out very often.  We’d originally met in 2011, at one of my public events. He was then very active in most events, volunteering, helping out and even organizing some too. We also became collaborators on a couple of projects, and would often hang out with friends. He was like a brother to me. Or one of the girls. Completely invisible as a man, or possible partner. In fact, the thought was so ridiculous, when someone finally verbalized it to me after a mutual friend’s birthday party (they thought we were secret lovers), I thought it was hilarious and also impossible.

Normally, when he left California, he would also leave my attention. When he was gone, he was really gone. And he wouldn’t pop up in my attention field until he sent me a text or Facebook message. But this time, this time not only was his visit different (I noticed two things: one that he was a man, and the other that he was extremely handsome), but after he left, he sent a continuous flow of text messages, which meant he did not disappear from my consciousness.

The second day after he left, I looked at all the messages on my phone, and realized that our discourse was not over. That our conversation needed to be had and concluded… All this time, I was writing the Interview with a Psychic Assassin book.

Long story short, some serious fires engulfed the areas around Sacramento, where I lived. My asthma kicked in, and I was not able to procrastinate my exit from California any longer.  I packed my car, my dog and drove North West toward the coast.  He suggested I travel to where he lives, as the air is clean, cooler and the sea is all around.

Of course I had huge resistance to do that! So I invited him to come with me on my European Tour during November 2014 instead.  Traveling with someone will often be a great way to get to know them quickly. Really know them.  When you are sharing small spaces 24/7, if anything is going to show up, it will.  Plus my public events are really high vibrationally charged, nothing dark can hide!

It’s now February 2015, and we moved in together… onto a boathouse.  Another amazing surprise is that living on a boathouse on the sea was one of my most cherished dreams. A dream I had actually given up on. When we tried to rent a house, any house, we found really crazy blocks coming up. We realized we were not looking for the right thing. Then his mother said to me, “why not a boathouse?” And I thought… whoa, that is one of my life long dreams.  So I asked him if he wanted to live on a boathouse. And guess what! That was his lifelong dream too… figures.

Now I am writing a new novel, one that explores and expresses who and what he is, and the journeys that took us into each other’s arms.  I’m here for the very first time as a being anywhere in time and space. He’s been here as long as time and space have existed.

If you are part of walkwithmenow.com, you know who he is.  If not, then you will have to wait until he decides to make himself known publicly. Not an easy thing to do 😉