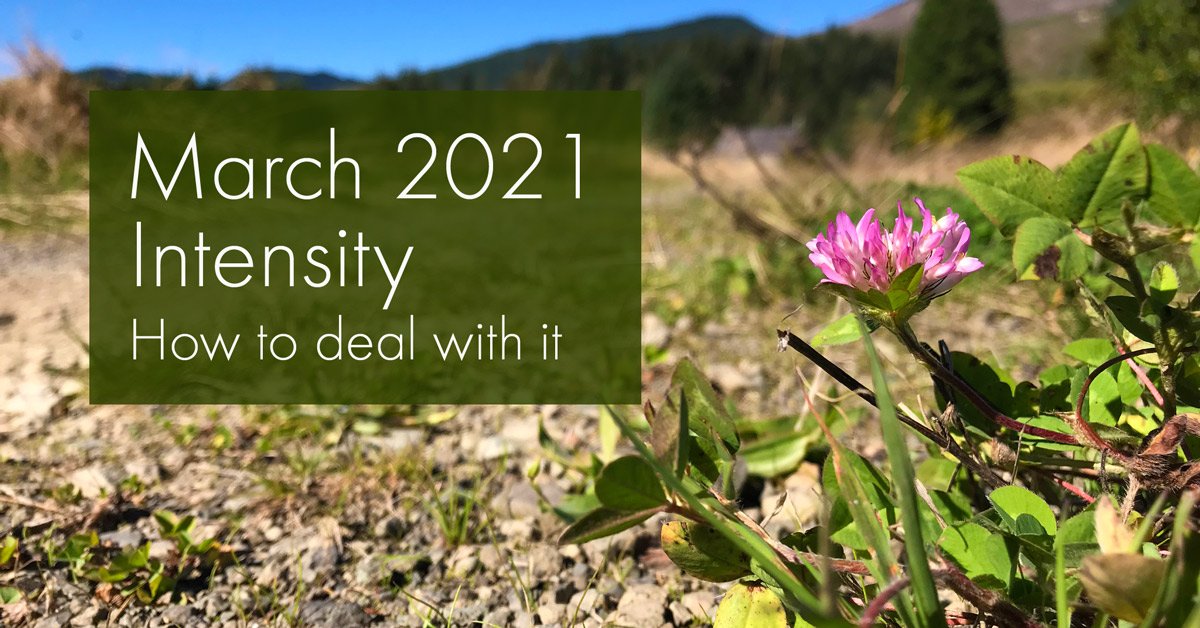 It is no surprise that March is energetically off the roof when it comes to our social situation. The split is becoming more and more obvious.

However, as a collective species, we all feel the effects of the intense terror and fear being indulged in and propagated by those who chose fear as their base energy. There are things you can do to minimize this effect, and they are not complicated. I will go into that in this article but first let’s look at what’s happening on the planet during March.

In January, those who are choosing fear got their marching orders. “Go get vaccinated”. And they did. It was really shocking for a lot of us that people who we considered to be high-frequency decided to take that route.

Many individuals I know are looking around and saying, “my loved ones got vaccinated and they got a little sick, but now they are fine.”

What follows is a mental conversation of perhaps it’s not so bad, that perhaps they might get it to keep the peace at home. Or to be able to travel again or go back to work.

Yes, some people are dying instantly or very soon after the vaccine, or having horrific side effects that pretty much will disable them for life. These numbers are being scrubbed, and not reported widely, the first stage of the “elimination of the masses” plan is not truly over. Many concerned experts are now stating that the deaths will really start when a new element is introduced into the vaccinated people’s bodies. Once this happens and official sources can no longer hide the death and disability numbers in the vaccinated, they will call it a deadly mutation, “Covid 21”.

The effect, at a planetary level, that will be felt the most is the “disconnect” from the larger human collective that those people who are vaccinated will go through.

And here is the crux of the matter. When I came into this life, it was clear to me that all of Gaia, all her creatures, all humans, would have a jump in frequency which would result in a jump in awareness, sovereignty and expansion of skill and abilities. Many of us called this jump “a planetary ascension”.

In 2011, a kind of “trial” was demanded on Earth. I describe it as a trial because that is the way in which my brain can interpret and translate what happened into human language.

During this “trial”, which was brought forth by groups of beings who are very much invested in low frequency games, it was agreed that elevating everyone on earth to a new frequency went against the rules of engagement. It was said, during the trial, that many people did not want to ascend in frequency, awareness or experience and that forcing them would be a violation of their free will. This was looked at by the Planetary Council (this is my name for the many entities who are on Earth and take part in the decision making of experiences that can be had here), and a decision was made that indeed, a global ascension process would be a violation of free will, and therefore those who did not want to go through it needed to leave by their own hand (clear unambiguous choice).

Mechanizations and orchestrations were put in place to remove all these billions of people (who chose the low-frequency experience over ascension), from the human collective and Earth.

Since then, I have wondered how that would happen. At the beginning of 2019, I received a message from a person I have known for my entire life, who works for the low-frequency side, and he simply told me that the plan to eliminate the “useless eaters” was being implemented “now”. “Useless eaters” is a term used by the low frequency POO (Power over Other) commanders to describe those people they deem a drain on resources without any appreciable contribution to the enrichment of themselves.

I told those around me of the message and we all wondered how it was going to come about. One of the items that he did tell me about was “nanoparticles” that were being added to fast food chain drinks like coca cola and pepsi cola drinks. Since then, it has become clear that the whole thing would be several layers thick. There would be several items the person would need to ingest or inject before the separation or death would come about. The main item they needed to subscribe to and ingest was fear.

As an outsider looking in, I can see how there was absolutely nothing we could do to dissuade a person who had chosen the path of fear from taking and ingesting all the necessary steps to disconnect from us. It’s elegantly designed to ensure only those who choose clearly and by their own hand select the required option to exit the planet.

Also, as part of the rules of engagement, everything a large group of people are planning to do on Earth, needs to be publicized. It needs to be made public, and needs to be available for people to see, read or hear and decide truly whether they will partake in it or not. This, to me, explained the reason why this person told me about all this. Once I know of these things, I am going to talk about it and make it public. Some people will react against my message and move to the other side, others will see it and know it is what they also know.

I suspect that if you have read up to here, you are one of the latter. You know what is going on and have taken a decision to raise your frequency, drop your low-frequency programs and work to create the new paradigm structures on Earth now.

In October 2019, I released my first “orders” video and message. I did it in the form of a youtube video, which simply stated that lightworkers needed to unite now and create new work structures, social structures and educational structures. The message had an urgency about it. At the time I did not know why it was so urgent, but of course now we all know why. If you listened, your work, your ‘tribal structure’ and your children’s experience were by and large pretty excellent. As one of my sons likes to say, “mom, this Covid thing has been nothing but positive for me in every way”.

At this time, March 2021, the intensity of the energies around these decisions are huge. If you are still engaged with low-frequency structures, people or friends, you will be pretty much fried by now. The way to deal with this is to simply stop fighting to change them. Use the “fear processing exercise” to deal with the tension that this dissonance creates in your life. If you haven’t already, switch off all news channels (TV, Internet, radio and people). Only check in once a week for one hour only, and make sure you use the higher frequency channels only, don’t bother with mass media. The mass media is not actually giving any true reports. The mass media is complicit in sharing and solidifying the exiting of the planet requirements for low frequency subscribers. The rest of the time, spend using the many tools I have given you through the years. Also make an effort to connect to others who are also choosing the high-frequency path in your area or online.

And whatever you do, do not get disconnected from Earth, Gaia and the high-frequency Human collective.

You are not alone!

Feel free to forward the link to this article, or forward the newsletter, to anyone and everyone you feel will benefit from it.