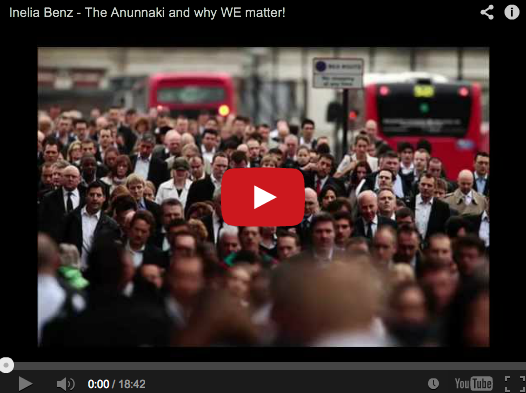 A seeing by Inelia Benz. The full transcript is below the video:

This is Inelia Benz for IneliaBenz.com.

Today I want to share with you a recording that I found in my cell phone.

When I go into meditation I sometimes will be looking at something, a subject or question that somebody has posed.

And if some information starts coming through or the seeing starts happening, I will switch on my phone and I will record it.

I found this recording today. I was quite surprised, because I don’t remember when I recorded it, so it’s quite interesting. I’ve listened to it and I thought that you may also find it interesting.

It covers the subject of the Anunnaki and also their influence on the planet and something quite new, which is our influence on their culture and their whole species and how that came about.

And also when I was looking at the DNA aspect of the question we went, or I went into the architects of our species and the intent behind the constructs of the human being.

So I think that that is the most important part of all this information.

Because it basically goes into how unlimited we really are.

I invite you to look at this information as you listen to it. Scan it with your own authority, have a look and see what resonates and how much further you can take it.

So if you like it, DO share it and put it on your blogs and I will see you next time. Bye!

(the audio recording has been left unedited. There will be long moments of silence and CAN induce an altered state of awareness)

I can feel their presence: the Anunnaki.

In their energy there is a dissonance. Their collective energy is dissonant.

When I look into that dissonance I sense an error and fear.

They created a humanoid species on the planet. Taking DNA material from a present species, which had been created by others, changing that material, making it denser. Creating a new being.

A being that can house a very advanced soul. It feels very much like that was not their intent, but the intent of the previous architects, the ones that created the original bodies.

The Anunnaki did not see it, because all they could see was simply DNA at a physical level, not the ultra-dimensional level.

They were creating drones, simple machines, to carry out a task. Exploiting the land, harvesting minerals and gems.

After they were done, they left, leaving behind the drones and the semi-rules that were programmed to give orders and to be obeyed.

By using their own DNA they created an energetic ultra-dimensional link to their own species.

For them it was very mechanical, very physical.

They should’ve… would’ve removed all of their creation as they left the planet, but they didn’t. Something happened and they left it behind.

The DNA continued to evolve, grow, becoming more expansive. Beings from around the universe were able to incarnate into three dimensionality using these vessels, which in and of itself trigger other strands, other aspects, of the multi and ultra-dimensional DNA.

Now the Anunnaki are coming back. Some of them never left, but became complacent.

The ones who are coming back, they’re puritans and they’re worried because our growth and awareness and power to affect this 3D creation affects them too. Suddenly and spontaneously, among their own people, are being borne awakened and enlightened beings. Beings who can sense and be aware of and existence beyond physicality.

An existence beyond the games that we chose to play. Importances and attachments. And that is breaking apart their once solid and everlasting society.

There are choices to eliminate the human race, yet they cannot do it, due to the nature of agreement in the physical universe. The program that they themselves wrote in the human species to survive, live defend at all costs, is still running and does not allow for an agreement of complete annihilation of this species.

Something is afoot on the planet. An expansion of awareness so broad, so accessible to so many, never seen before.

It could change reality as we know it.

Yet, panic and fear, get triggered.

How to express that all attachments are illusions? That all importances are insignificant?

How to express that any games we can play in physicality, all the games we are aware off are nothing compared to what we can play or what we can become if only we are allowed the possibility of an alternative reality enter our minds and our field and our body?

Why not just pretend? Pretend that there is another possibility.

Pretend that it is YOU who creates the Universe moment to moment.

Pretend that this physical environment where you find the physical body in, is just an illusion.

And illusion that is pliable as a child’s play-dough set.

Do you dare to pretend that this is true?  Just for a moment… a second…

And feel the winds of change as they pass through you…

So quickly that it becomes pure light.

Do you dare to choose not be a singular being?

Not to be the monolog of thoughts streams, importances, attachments, problems, fears, joys and loves, and experiences.