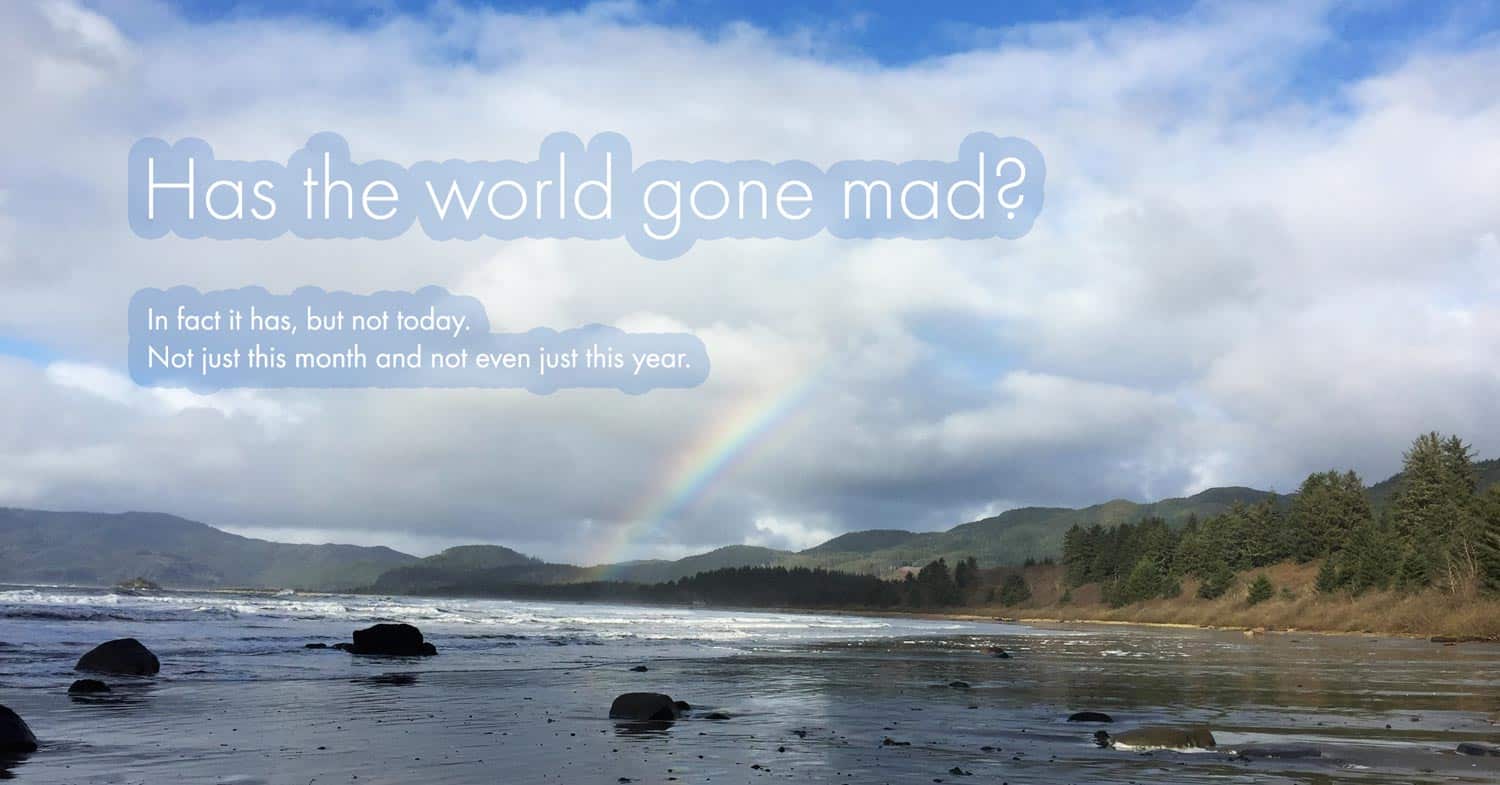 Has the world gone mad? In fact it has, but not today. Not just this month and not even just this year.

Some weeks ago, I was doing an exercise with one of my students, an exercise of scanning the collective. We were discussing the way in which when we scan the larger planetary human collective the picture is always the same, lots of noise and fear. I then went to explain that if a mystic wants to get accurate information about the human collective, he or she needs to be more specific.

Then I started reflecting on this. It became a curiosity because as far as I am concerned, the world is completely nuts right now. Mad as hell. So why didn’t the scan show it??

Because the level of madness, fear, craziness and noise hasn’t changed!

This became a puzzle, I like to figure puzzles out.

I sat down and went into the frequencies and also the question of why it doesn’t feel different. And the answer came very quickly. The reason is that the madness, fear and noise has not changed but their visibility has!

It is now IMPOSSIBLE to ignore the madness. It is now impossible to pretend that everything on this planet is fine and be part of the madness.

In the past, I would often say that if you wanted to gauge the madness on Earth, just think about why it is that you need to pay to live here. It’s your planet, so why do you have to pay for food, shelter, health, communication, travel, the clothes on your back, even water!

Feel into that paragraph above and you will see that the madness didn’t get worse, it’s pretty much the same.

Fighting to get things “back to normal” is a joke.

We had an impromptu get together yesterday at the Shamamshack with some of the community members, and we talked about my last newsletter where I speak about the “three days of darkness”. Some of the members were talking about getting ready for it. Buying enough food and supplies to see them through it. Then I pointed out that the “three days” of darkness started at the beginning of this year and the reason they hadn’t felt it was because they are keeping to high-frequency co-creations. The ones going through hell are the people who are terrified of contracting covid19 and quarantining themselves at home waiting for the life-saving vaccine to arrive. The horrific “three days of darkness” is something they have been living in and with for months now.

By their masks you shall know them.

Again, the statement above does not include those individuals who are not subscribing to the fear mongering on the planet but have conceded on occasion to wear masks to go to work or the store. It refers to those people who wear them while alone in their car, at home, and are literally terrified of “contracting the disease”. These are those people who have decided to continue an existence ruled by fear and separation.

If you haven’t already, move out of the city. Find tribes that match your frequency and become as independent as possible from the governing and social infrastructures that rule by fear, slavery and darkness. Let those structures crumble. Some will transform to support high-frequency choices and others will simply vanish.

The madness is not more or worse, it’s the same madness. But NOW YOU CAN SEE IT.