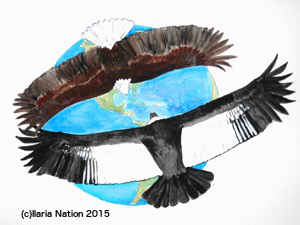 A while back, guidance asked me to go check out a blue/grey prefabricated house. I had seen the house on Highway 101, between Port Angeles and Sequim, Washington.

We went to see it and found that it was an events building. The instructions were clear, look at the blue/gray house, look at the plans, don’t buy the house. We did all that but didn’t know what was next.

A few weeks later, Larry started to train with the Earth People Consciousness Stream (a shamanic path), and various other individuals also expressed interest in learning from and about that branch of shamanic consciousness stream.

I woke up one day and knew the house was a sign to go out and find a location for placing a shaman shack. A shaman shack is an open door hub that is basically a place To Find the Shaman.

As the weeks went by, we knew the actual location to put the shamanshack was in the Makah Tribe Native American Reservation, and we knew it was somehow linked with the Global Ascension Center. We also knew it had space for a car park but the “main entrance” door was behind trees, so the person had ample opportunity to shed their stuff and lots of trees to hang their worries before they entered the shack.

Land in a reservation is owned by the federal government and can only be “purchased” by tribal members. So, lots of “impossibilities” to get through.

For the month of conscious manifestation exploration, Larry and I decided we wanted to manifest the shamanshack in the reservation in an easy and low story/choreography way. Instantly if possible.

The shamanshack is about people and wanted people involved. But there were still many loops to jump, according to how things happen in the reservation, before we could even find a place to put the building on. So we decided it was not permanent as no land can be owned permanently on the planet, and that we would be given access quickly, and if not, we would simply squat on it. And by the time we got evicted it would be years from now.

Of course those stories did not come to pass (squatting and getting evicted).

On one of our walks, we found a location in the middle of the village. We had no idea who it belonged to, and thought we had to wait until the next Monday to find out. But Larry’s uncle coincidentally drove by and told us who the land belonged to. Larry called the person the next morning, the land is owned by 6 people, and they appear to be super enthusiastic about leasing us the land right away. The price is 10k per year, that’s just over 800 per month, less than the rental of a house in the area!

As the weeks went by, then months, we found lots of delays on the leasing of the land. The owners finally sent us a copy of the lease which was super restrictive with regard what we could do there and what happens to everything we put there after the lease is over.  We sat in contemplation and asked our higher selves why we had manifested such a restricted piece of land. The answer was clear and immediate. It was simply that the land that manifested fitted our “comfort level” of being responsible for land. Both Larry and I had firewalls and programs around owning land. The restrictions on the lease addressed all these programs and firewalls. We asked, “what would happen if we processed the firewalls and programs?” the answer was, “then you can manifest and own 100,000 acres or more if you want”.

So we began the work of processing our firewalls and programs around owning land and the responsibility this entails with regard Gaia and the people and animals who would be in the land.

This month, we found another piece of property in the Reservation that is not restricted to be owned by a tribal member only. We can purchase it. It is nearly 20 acres in size, has a water front, and is magical. The plan now is to acquire both properties. The one in middle of the village has to do with people, society, cleansing the heart of the village, and is very “busy”. The 20 acres is quiet, wooded, magical, and can be activated as part of the Global Ascension Center. We see them connected. The village one is still temporary, and doesn’t belong to us, so activating it as sacred land, would be limited to the vibration of the owners. The 20 acres, once purchased, would be owned by us, including everyone who has ever donated or supported the Global Ascension Center, and thus we will be able to activate it.  This will be a place where Gaia and the human species become ONE.

So, the Shamanshack is the door, the gate and the lighthouse that leads individual into that sacred beingness which is whole. It taps into and connects with Gaia and the shamanic consciousness of the Makah Tribe (North America) as well as the Mapuche (South America).

Larry and I have taken full responsibility for acquiring and carrying out the work on both properties. We hope to make it self sufficient and accessible to all of humanity. We are presently looking at ways in which to raise the funds for the land, create spaces and forms in which individuals who want to be part of this will be able to support themselves and the land. And provide the space, connection and access to the Shamanic Consciousness Streams to which we have access to. And we also fully include the goals and manifestation of the Global Ascension Center.

What is the Global Ascension Center?

The Global Ascension Center is a non-profit organization which is establishing its first major project: to acquire land where a Person, Source, and Earth become One. A Center where there is no distinction between what is mundane and what is Sacred. Where there is no separation between the person and his or her environment.

All of us have heard of Sacred Land. Sacred Land is something that we often associate only to Native People’s from around the world who consider all of Gaia a Living, Conscious Being.

Yet we, in the West, have lost our capacity to see our Earth this way.

Due to our cultural viewpoint of being separate and independent from Earth, Land and Environment, we built a society under the tenets  of “taming and exploiting” of our Earth.  The results are personally felt in stressful city living, as well as globally with widespread pollution, and numerous social problems.

By the time Westerners realized that Sacred Land was to be revered and protected, most of it was indeed built on and destroyed.

Fortunately, we now know that there is something very special about those locations. Around the planet millions of dollars are spent every year as individuals travel long distances to reach, and experience, Sacred Land. Their pilgrimages take them to a location where they can have a larger than life experience, a reconnection with their own divinity, with Source, or even with Gaia.

Yet that connection can be achieved by any of us, anywhere we are. Not only that, but it can be created in conjunction with the beings who inhabit the land. The trees, the animals, the bugs… all have a conscious awareness of their place on the planet. The planet itself is recognized by most cultures to have its own identity and consciousness. Gaia, Pachamama, Madre Tierra.

Here in the West, we have disconnected from that ability. The ability to be one with our environment. To reconnect with our Earth. And we look for it thousands of miles away, at some Sacred Land location. We go there passively, expecting something to be given to us. Or we go in thinking we need to do stuff to the land in order to “heal” it. We leave bits of ourselves there, our vibrational luggage, and sometimes even objects such as crystals, photographs, or markings that we were there. Sometimes we take with us stones, or other objects from the Sacred Land.  All this we do to connect and stay connected with that higher vibrational environment.

The Global Ascension Center is a place where we carry out a real time journey of remembering how to be one with our environment at a very physical level. How we can take any land we own, raise our own vibration, raise the land’s vibration if it needs it, and reconnect with it at a higher level of awareness.

Do you like our new flag design at the top of this article? It was designed and painted by Maureen at mksmiley.com with our input 🙂